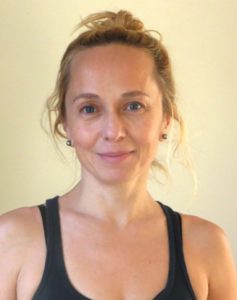 Blanche started to practice yoga when she was nine years old, with her father. Quickly, yoga became a major interest, and she began to read everything she could find on the subject. Growing up in Communist Romania, there were not many books on yoga, no teachers, and no studios. When the Communist regime fell in 1989, the society opened to new possibilities. Blanche studied yoga in the Patanjali tradition while she was a student in psychology at the University of Bucharest in Romania. This included learning effortless mantra meditation. The meditation proved to be an unsurpassed way to learn about oneself and reality, and soon Blanche would spend many hours sitting every day. Her yoga practice reached a new level with the Advanced Yoga Practices taught by Yogani. Besides Yogani, other major influences have been Katagiri Roshi, the Dalai Lama, and Amritanandamayi (Amma).

She attended the yoga teacher training at West Hartford Yoga, in Connecticut. Here eclectic knowledge and personal experience combined with humor will leave you inspired and energized.

“You know that thing when you think you soul might be finally crushed for good and the nameless, wordless, friendless dread of the city has sucked you dry? Well, this place has the cure. You can help with the grounds and garden, you can yoga and meditate, you can get the best massage in 48 states, you can eat the most delicious vegetarian cuisine, and my favorite, walk the trails and paths through bubbling brooks and over rushing waterfalls and regain your spirit and feel the beat of your heart in time to nature.”