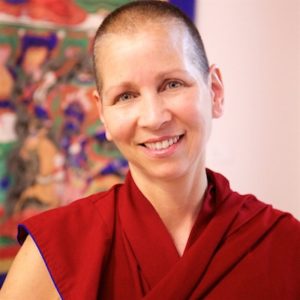 Ven. Lobsang Chodren first encountered Tibetan Buddhism in 1987 at Kopan Monastery in Nepal. Since then, she has spent a great deal of time engaged in meditation retreats, study, teaching, and Buddhist center management throughout the world. Prior to encountering Buddhism, Amy was a political fundraiser in Washington, DC and also worked for Mother Jones Magazine in San Francisco, California. Amy also trained as an emotional support hospice counselor during the peak of the AIDS epidemic in San Francisco and offers courses and retreats on death and dying and end-of-life care.

A past director of Vajrapani Institute in California and Milarepa Center in Vermont, Amy was ordained as a Buddhist nun in June 2000. She has been teaching extensively since 1992 and is happy to help people connect with meditation and mindfulness in an effort to gain a refreshing perspective on stressful living.

Amy also leads pilgrimages around the world and will be leading a trek to a holy cave and retreat center in the Mt. Everest region of Nepal in October 2018. She is the co-author of Buddhism in a Nutshell and a contributor to online courses for the FPMT (Foundation for the Preservation of the Mahayana Tradition). Based in the United States, in Philadelphia, Pennsylvania, her teaching schedule and other information can be found at www.AmyMiller.com.

“Your facilities and location are outstanding for retreats, and the staff are incredibly courteous and helpful. Being in the mountains, wandering along the streams and paths and disconnecting from the business of our daily lives was wonderful. Thank you for creating such a welcoming and warm environment.”

“Great place overall. Beautiful grounds, excellent service and friendly staff and well-maintained rooms/property. Also the food was awesome, creative and unique. Great experience, very relaxing and tranquil overall, if your looking for a retreat from the city!”