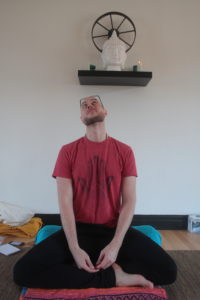 TJ’s Yoga story began when he received a book, the Tao Te Ching, as a gift from his sister 18 years ago. The book poetically explores ideas that resonated with him then and continue to guide him today.

With an MFA in art and 6 years as a grade school art teacher TJ has a deep appreciation for the journey of self-exploration that is essential to learning. After years of travel, research and meditation TJ decided that the inward journey would be his focus. He began seeking out teachers to deepen his understanding and go beyond the limits he had reached on his own.

He took up residence at CAVE in Brooklyn NY, a Butoh Dance & performance space and began to study movement with several visiting teachers from Japan. During that time he also began practicing Shaolin Kung Fu and Tai Chi with Sifu Shi Yan Ming, a 34th generation Shaolin Temple monk. Soon after he travelled to San Francisco to study Zen Calligraphy with Kazuaki Tanahashi, a teacher of Zen Buddhism.

When possible, TJ also attends lectures and teachings offered by HH The Dalai Lama, including the Kalachakra Mandala teachings that were offered in Washington DC in 2010.

TJ founded YUJMU in 2014 to share the subtle practices that had brought him so much joy and wellness.  Currently focused on Yin Yoga Teacher Trainings YUJMU has grown to reach an international audience creating highly trained Yin teachers worldwide.

Most recently TJ went to Kripalu Center in Massachusetts to broaden his training and completed the first part of a Thai Yoga Massage certification with Sukha Wong.

“Of all the places I have traveled for retreats, Menla is the BEST!

“You know that thing when you think you soul might be finally crushed for good and the nameless, wordless, friendless dread of the city has sucked you dry? Well, this place has the cure. You can help with the grounds and garden, you can yoga and meditate, you can get the best massage in 48 states, you can eat the most delicious vegetarian cuisine, and my favorite, walk the trails and paths through bubbling brooks and over rushing waterfalls and regain your spirit and feel the beat of your heart in time to nature.”