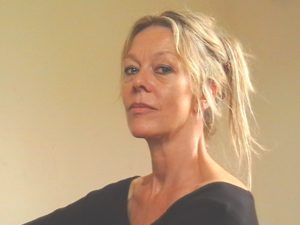 Josephine Larsen trained at Bristol Old Vic Theatre School (England) and is now a fully qualified teacher, director, theatre coach, author and NLP Master Practitioner, specialising in Stage/Film Acting and Communication Skills. During her 40yr professional career in Europe, she worked closely with some of the most pioneering artists in Theatre and creative Media – amongst others – Ian McNaughton (producer of MONTY PYTHON); Vladek Shebal (WOMEN IN LOVE); Marianne Segebrecht (BAGDAD CAFÉ); Bruno Ganz (WINGS OF DESIRE; DOWNFALL) and starred in the Cult Film CLEMENTINE TANGO, which ran for 5 years in Paris, Los Angeles, Rome and Berlin. Recently she helped coach actors in a new Hollywood movie, directed by Richard Stanley and starring Nicolas Cage, which will be premiered later this year.

In between her professional work, she manages/directs her own ART14 Theatre projects and productions in Devon, England, whose aim is to encourage social transformation and individual self-actualisation through theatre and arts. Josephine’s continued passion and research includes ancient philosophy, Jungian psychology, the surreal, alchemy and advanced communication skills. In 2016, she wrote and published the “The Power Of Acting: discovering the person behind the mask”. She is currently writing her second book titled “The book of Josephine”.

“Menla sits on an energy vortex that is said to be the oldest known meteor crater in the world, and you can feel it. Maybe it’s electromagnetic, or maybe it’s the amazing energy of the people here, but Menla is a powerful and nurturing place that draws you like a giant magnet…. Menla is a deeply spiritual, restorative place, where you can reconnect with your higher self, ponder life’s true meaning.”

“I spent the week in a yoga and meditation retreat. What a beautiful place! High in the Catskills mountains, where you can see the stars at night, and the trees are as high as the sky. The accommodations aren’t luxury, but they were perfect. Everybody is so kind and nice. We got to practice different kinds of yoga, and went to a couple of hikes. I felt happy and relaxed. They also have an amazing spa. How have I never heard of this place before? Now I can not wait to go again!”

“The food was fantastic, the pool was very relaxing, and the setting was spectacular! I suggest hiking the Metta Loop Trail when you are there. On the Menla property you will see lots of wildlife, such as deer, possums, and small bears that are harmless and used to our presence.”