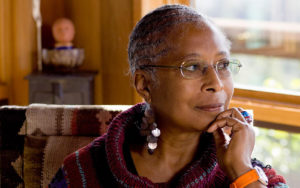 The author of short stories and novels, essays and poetry and activist for racial civil rights, women’s equality and peace among other causes, Alice Walker brought black women’s lives into primary focus as a rich and important subject for US American literature. Her landmark novel The Color Purple (1982), which drew upon her sharecropper family’s Southern roots, made Walker famous the world over and brought her the first Pulitzer Prize for fiction awarded to an African American woman, as well as the National Book Award.

Walker’s introduction of the concept of “womanism” (1983) was an influential corrective to the focus on white women understood by many under the term “feminism;” it helped broaden the women’s movement to include women of color and appreciate their traditional cultural and creative roles. “Womanism is to feminism as purple is to lilac.” (Walker, 1983).

“Beautiful place, amazing people! I had one of the best massages of my life. What stood out unambiguously at Menla, was that I felt peaceful there.”