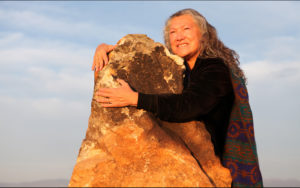 Born the youngest of 15 children in the highlands of Central America, Flordemayo was found at an early age – like others in her family – to have the gift of Sight. By age four, she was being trained in the art of curanderismo, which had been handed down from mother to daughter for many generations. Flordemayo’s mother was a midwife and healer and taught her daughters in the use of herbs, women’s medicine and how women are to honor and care for our Mother Earth.

Flordemayo now lives in New Mexico. She is a frequent presenter at national and international conferences and events, universities and colleges. Since 1999, she has been part of the Wisdom of the Grandmothers’ Foundation. She is the recipient of the Martin de La Cruz Award for Alternative Healing, a prestigious honor given by the International Congress of Traditional Medicine. Flordemayo is a Founder of the Institute for Natural and Traditional Knowledge, dedicated to preserving and sustaining native plants. Currently, in addition to her independent work as a Universal Healer, featured speaker and woman of prayer, she is the Founder of The Path, a 501(c)3 dedicated to the preservation of traditional knowledge and heritage seeds. Through her work with The Path, Flordemayo maintains a seed bank and holds gatherings to further educate and raise awareness of the importance of seeds. For without these seeds of the Earth in the hands of the people our future would be threatened.

Flordemayo travels our beautiful Mother Earth to share her teachings and healing gifts, inspiring and fostering more spiritual understanding among people, so that all people may unite as one. Flordemayo is now formally recognized as the keeper of her family’s sacred staff which has been passed down for 12 generations. She works as a healer/curandera and is a Sundancer who considers her Mayan heritage a keystone of her work.

“Menla is an amazing place to spend time. Delicious healthy food, comfortable bed, beautiful scenery, nature. Of course, some of my favorite teachers were there too… Krishna Das, Sharon Salzberg and climbing to the top Bob Thurman. Thanks to the staff who made it possible to enjoy such an inspiring place on this planet.”