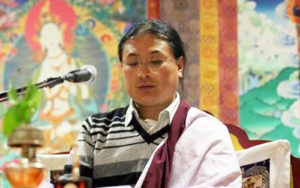 Alongside his medical education, Dr Nida received comprehensive Vajrayana Buddhist training in the Longchen Nyingthig and Dudjom Tersar traditions and is a lineage holder of the Yuthok Nyingthig, the spiritual healing tradition and esoteric component of Sowa Rigpa. A well-known poet in his youth, Dr. Nida later published many articles and books on Sowa Rigpa (Traditional Tibetan Medicine) and the Yuthok Nyingthig tradition, and his extensive research and revival of ancient Tibetan healing methods has earned him great acclaim in both the East and the West for his revival of traditional Tibetan external healing therapies.

In addition to his work as a physician, he trains students in Sowa Rigpa and the Yuthok Nyingthig tradition in over forty countries around the world. 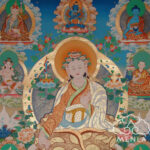 Tantric Ngagpa Lama Doctor, Yuthok Yonten Gonpo the Younger (1126-1202 CE), transmitted the Buddha’s medical knowledge and teaching developed over 17 centuries by learned and enlightened mendicant and lay physicians in various kingdoms in the Indian subcontinent, revealed outside Vaishali city by Shākyamuni Buddha and transformed for the occasion into the dark blue sapphire-colored radiant Eighth Medicine Guru Buddha (Bhaiṣhajyaguru Buddha). In fact, the Younger Yuthok was himself considered an emanation of the Medicine Buddha, resurrecting the Indian Four Medicine Tantras codified by Vāgbhaṭṭa, the vast literature of Indian Buddhist medicine that burned with the destruction of the Library of…