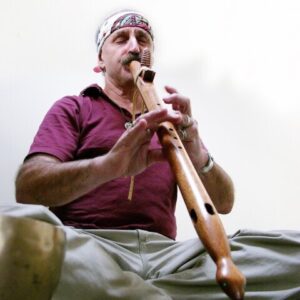 A senior hypnosis instructor for the National Guild of Hypnotists, has trained hundreds in the spiritual art of hypnosis. He has co-facilitated hypnosis and storytelling workshops with Dr. Lewis Mehl-Madrona (author of “Coyote Medicine”), and is an Adjunct faculty member of the Coyote Institute. Peter has served on the Board of Trustees of the Deep Listening Foundation, has taught at the Omega Institute, The Graduate Institute, and presented Sounds for Healing concerts and workshops at The Abode of the Message, Menla Retreat Center, and numerous yoga studios throughout the United States. A musician all of his life, Peter has studied music and sound healing with Dr. Karl Berger, Ustad Jamaluddin Bhartiya, Beautiful Painted Arrow (Joseph Rael), Pauline Oliveros, Fabian Mamman, John Beaulieu, and Don Conreaux. His six CD’s in the “Sounds for Healing” series are perennial favorites as an adjunct to meditation, guided imagery, yoga, massage. In 1988, Peter Blum met Native American mystic and visionary Joseph Rael (Beautiful Painted Arrow) and became his student. He slowly received Joseph’s teachings on the practice of working with the vowel sounds in a particular fashion. With Joseph’s blessing and encouragement, he has been incorporating them into his private sessions, and using them as an essential part of teaching sound healing. According to Joseph, these vibrations are encoded into our DNA, and also reflect certain “principal ideas” which can best be understood by the practice of the chanting of the vowel sounds.
Followed by a Sound Tool Demontration.

“Really enjoyed my time at Menla. It’s amazingly peaceful and quiet, the people are incredibly nice and approachable, the humility of the Dalai Lama permeates throughout the place. The accommodations are nice and the food is great.”