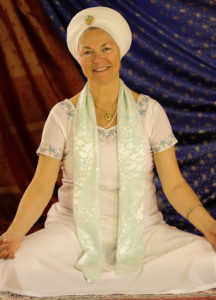 began practicing and studying Kundalini Yoga and Meditation as taught by Yogi Bhajan in l972 in Michigan. Upon finding something that truly spoke to her soul she soon moved into an ashram in New Jersey where she married and helped direct the ashram there. Studying under the direct guidance of Yogi Bhajan with every opportunity possible she knew her life had found its path and focus service others on their path to self-awareness.
In 1974 she became a minister of Sikh Dharma and finds performing marriages to be among her favorite things to do.

Nirbhe Kaur is a soft-spoken woman with a gentle and warm heart who feels her greatest joy is in teaching, sharing and inspiring others to find their wholeness, radiance, and bliss.

“I have traveled personally and professionally to Spas around the world. Menla is unique and world class in its substantial healing modalities, exquisite hiking, and breathtaking temple-like environment. This is a “ jewel “ of a spa retreat nestled in the mountains … a real find!”

“Menla sits on an energy vortex that is said to be the oldest known meteor crater in the world, and you can feel it. Maybe it’s electromagnetic, or maybe it’s the amazing energy of the people here, but Menla is a powerful and nurturing place that draws you like a giant magnet…. Menla is a deeply spiritual, restorative place, where you can reconnect with your higher self, ponder life’s true meaning.”