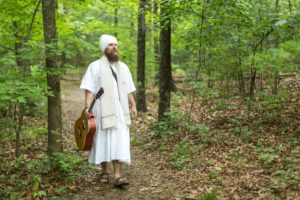 When Gurunam Singh graduated high school he was given a guitar and began composing simple songs. At 22 he found Yogi Bhajan and Sikh Dharma. He sang and played along with others and over time began leading chants in the early morning hours, before the rising of the sun. He spent lots of time in the solitude of his own home, and in the Sikh temple late at night, chanting to God and writing devotional songs. Gurunam’s influences range from gospel, folk and country to classical Indian raag and traditional Sikh hymns to many of the current artists who sing devotional Hindu chants. He occasionally studied with some great ragi’s such as Bhai Avtar Singh, from India, and Dya Singh from Australia. But his music is very simple. Anyone can chant along.

Find out more about Gurunam at his website, here.