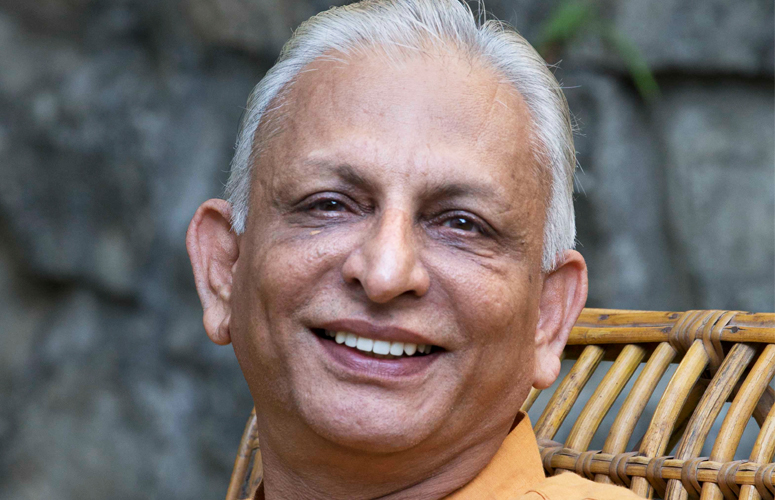 Mr. Mumtaz Ali (also known as Sri M) is a spiritual guide, social reformer and an educationist. He is an accomplished yogi who lived in the Himalayas and was trained in the nuances of the many spiritual paths by his master Sri Maheshwarnath Babaji whom he fondly calls Babaji. With his deep understanding of the essence of all religions, Mr. Mumtaz Ali has emerged as a torch-bearer of peace, communal harmony and tolerance that are of imperative relevance in today's conflict ridden society. He has been striving towards this objective for several years through his numerous social initiatives aimed at the promotion of non-violence and peaceful coexistence. Born as Mumtaz Ali in 1949 in Trivandrum (Kerala state in India) he finished his graduation and left for the Himalayas on a spiritual quest at the age of 19. His transformational journey, from a young boy to a living yogi, is a fascinating story symbolizing single-minded discipline and dedication. He met saints and sages of innumerable paths, eventually gaining his spiritual fulfillment under the guidance of Maheshwarnath Babaji. Babaji assigned to Sri M the mammoth task of spreading the message of Peace and Harmony which became his life mission. On his return from the Himalayas, Sri M mobilised initiatives for the poor tribals and implemented programmes especially focussed on promoting tolerance, non-violence and human oneness. His autobiography, "Apprenticed to a Himalayan Master: a Yogi's Autobiography" is an international bestseller and has been translated into German, French Russian, and nine Indic languages. Sri M’s kindness to the underprivileged is evident in the free school Satsang Vidyalaya that he runs for the tribal children of Madanapalle in Andhra Pradesh. The school encourages the children of the nearby Lambani thanda to attend school by offering free food and stationery to them. The school also trains the students in several skills that could help them lead a dignified and independent life in future. His innovative and life-enhancing ideas of education are manifest in the methods of teaching he has introduced in The Peepal Grove School, founded by him at Sadum in Andhra Pradesh. The Manav Ekta Mission that Sri M heads works towards spreading the oneness of religions by encouraging people to go to the core of the beliefs that nurture the innate goodness in all human beings. In this pursuit, Sri M has laid the foundation stone for The Sarva Dharma Kendra in Bangalore. The Satsang Vidyalaya, The Peepal Grove School and the Manav Ekta Mission function under The Satsang Foundation founded by Sri M to facilitate useful work to assist the underprivileged and deserving to be able to lead lives of self-respect, self-reliance and peace. Our generation has a responsibility to do whatever possible to protect populations from the most serious atrocities against humanity in the name of caste, creed, social and religious differentiation. India frequently faces such challenges in the form of communal skirmishes and riots that affect national peace and stability. International dimensions of such conflicts are much larger and complex in nature. Mr. Mumtaz Ali implemented a peace initiative in India called the Walk of Hope for promoting peace and harmony. The Walk of Hope was a 7,500 kms long Walkathon from Kanyakumari in the Southern tip of India, to Srinagar in the Northern state of Kashmir. The Walk started in January 2015 and the impact was astounding. Millions of people from different denominations joined hands with Sri M and resolved to spread the message of a peaceful living. The Walk concluded at Srinagar, Kashmir in April 2016 and was completed in 474 days. Mr. Adama Dieng, Special Adviser to the United Nations Secretary-General on the Prevention of Genocide also participated in the Walk of Hope and in the International Summit for Peace and Harmony at Banaras Hindu University, Varanasi, India on December 19 and 20, 2015. Mr. Dieng also participated in the Nirahar Satyagrah, fasting for the cause -- at Varanasi, a tool often adopted by Mahatma Gandhi as a non-violent means to achieve noble causes. The peace mission of Sri M is spreading to Europe during March 2017. He will undertake a Walk of Hope in Berlin on March 19, 2017 and The Hague on March 30, 2017. He will be addressing school children and several other gatherings at Berlin, Zurich, Bern, Interlaken (Villa Unspunnen), Amsterdam and The Hague to promote the message of peaceful coexistence and non-violence. His life mission in his own words may be summed up as - "Born human. Be human. Every step for humanity."

“The food was divine! I’m not a vegetarian and will say the meat was not missed while here. I thoroughly enjoyed my stay…. The staff was warm and courteous. Space very conducive for retreat. Great common spaces for community and plenty of space for solitude. Will return again.”

“About a three-hour bus ride from Port Authority Bus Terminal to Menla. As the landscape changes from cityscape to mountains, and as you witness your cell phone signal strength dwindle to “no service,” you quite literally unplug yourself from the mundane hustle and bustle of everyday life back to simplicity of nature.”